We've been playing this game about every other day where we have to catch a huge white rabbit!!  This rabbit burrows out of our little fenced in garden area.  It loves to be free!  I actually like to see it free!  It then hangs around our house all along the edges of our yard--it could run off into the surrounding wildness, but it doesn't!  When we try to get close, she scampers off--big back feet--stretching its long body and bounding into the brush where, even though its bright white, it disappears!  She'll turn up later after we've given up, lounging under a bench near the house. 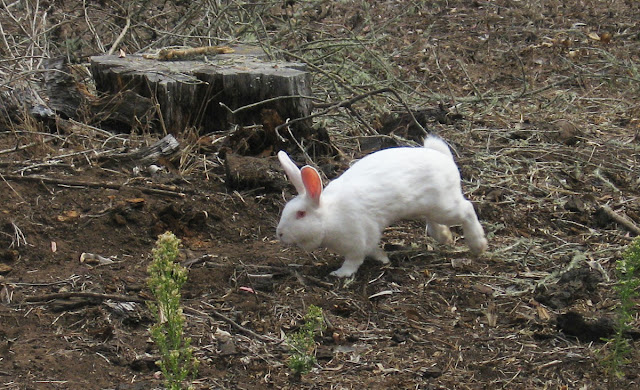 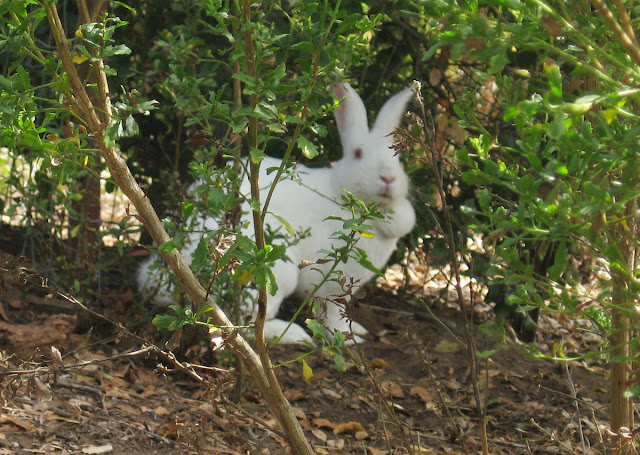 She'll let me get close, especially if I have a treat, some almonds or fresh greens--see, she's wondering what I've got, but she's ready to bound... 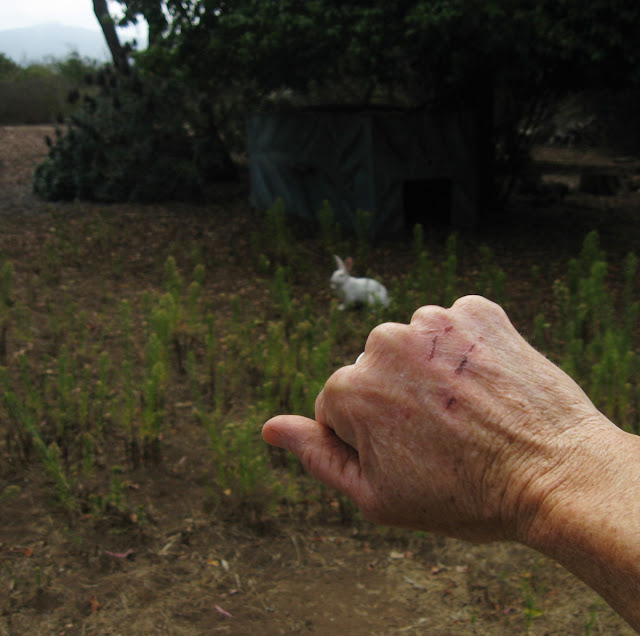 I caught her the other day, but didn't have a box handy, so yelled out to my husband to get the box--Of course I scared her and she was determined not to get caught, so she just pumped her legs and scrambled out of my grasp, gashing my hand and arms--I was so intent on holding on to her that I didn't know I was bleeding--the bright red blood on my hand was quite a contrast with the white rabbit!
Hmmm---I'm ready to just let her be, but we have all sorts of night animals on the prowl around here and my granddaughter would be devastated if something were to happen. 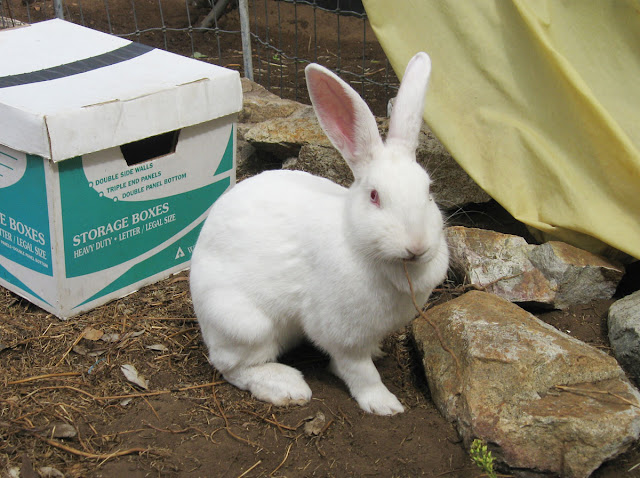 There she is sitting right outside her fence--munching on a root--teasing me!  I can't help but laugh--she even let me pet her!  I can see she wants to get to her food--the garden door is open--I quickly go get some fresh greens and wave them about... 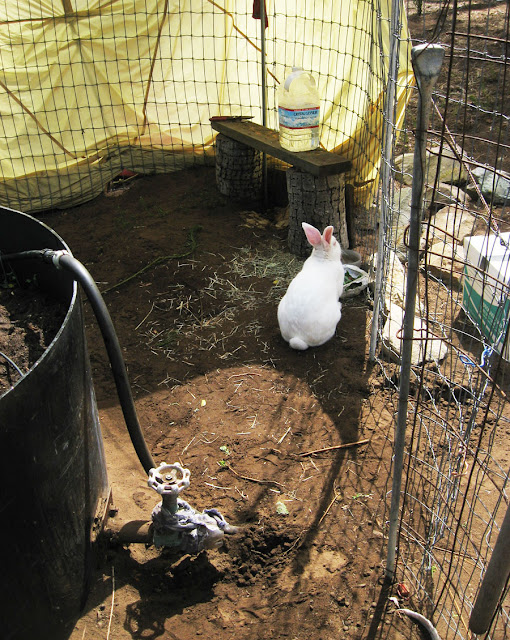 I tear them up with a flourish making yummy sounds--she's in--she can't help it, she wants the swiss chard. That was easier than trying to nab her!!  I've been working on setting rocks down around the outside of the fence, but I'm not sure if that will hold her--I've got a feeling that we're making her into a wild rabbit--she's had the taste of freedom--where she can run and jump with abandon! 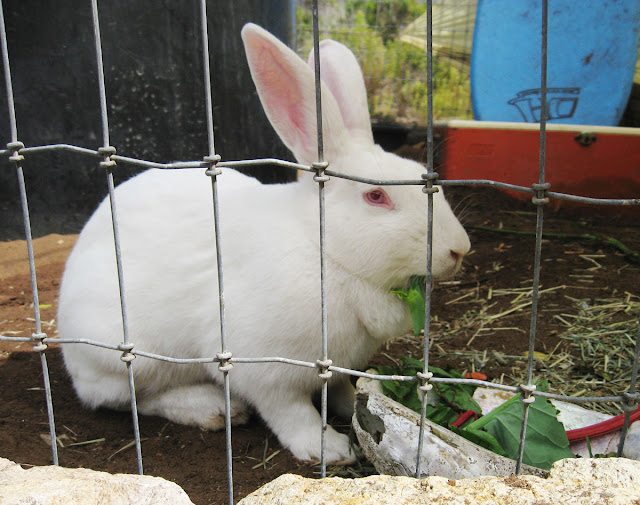 I won this one--or did she? 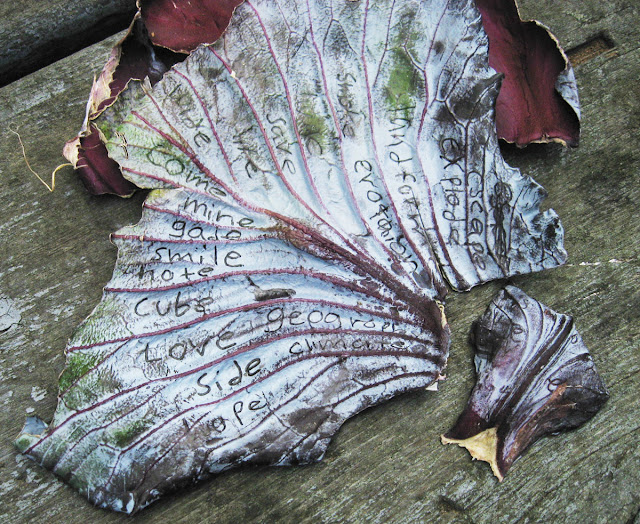 There was an old cabbage leaf handy when I gave my granddaughter a practice spelling test... 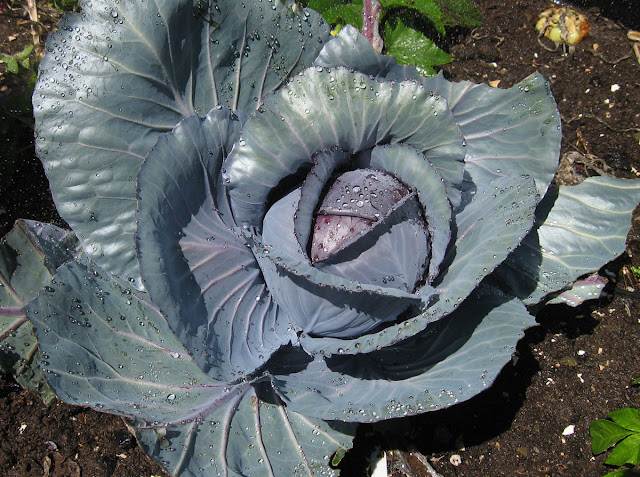 It must have come from the outer leaves of this--the 2nd and final cabbage plant we had growing this summer--I love its colors!

Posted by Susan Beauchemin at 11:21 AM 2 comments: 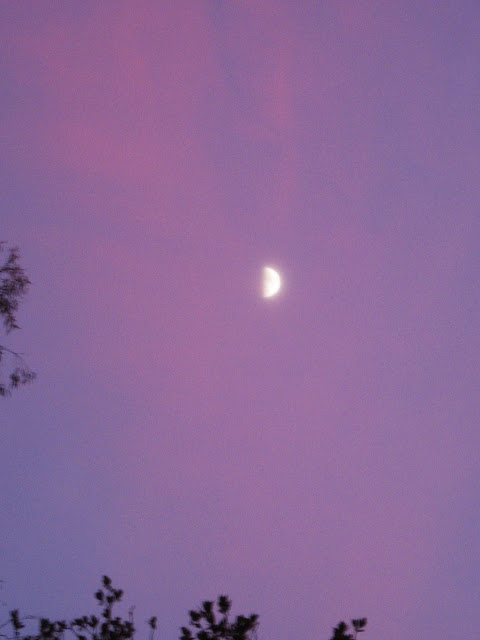 Yesterday's moon in the first quarter phase on the Autumnal Equinox in a sunset sky.  Even the moon is in equal halves.
Posted by Susan Beauchemin at 12:15 PM No comments: 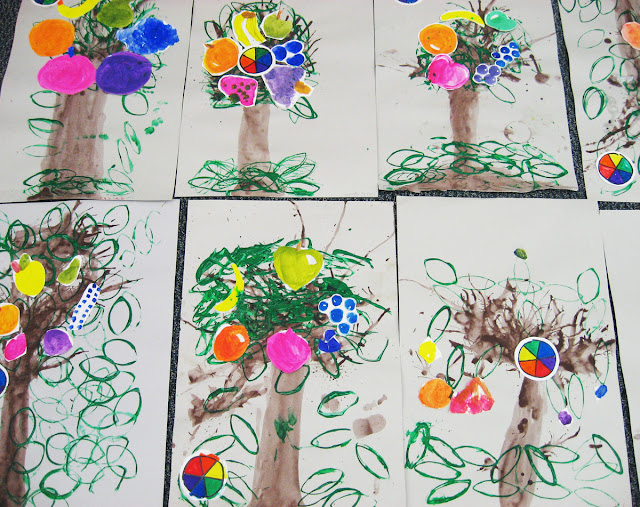 I'm volunteering in my granddaughter's third grade class--here's the first art lesson of the year.  It was my granddaughter's idea to have a color wheel tree with the primary and secondary color fruits.  Last week we mixed colors and painted fruits for each color of a simplified color wheel.  We then painted the trees with a thinned down brown tempera, so we could create the branches by blowing the paint with a straw. (We had a few dizzy kids!) 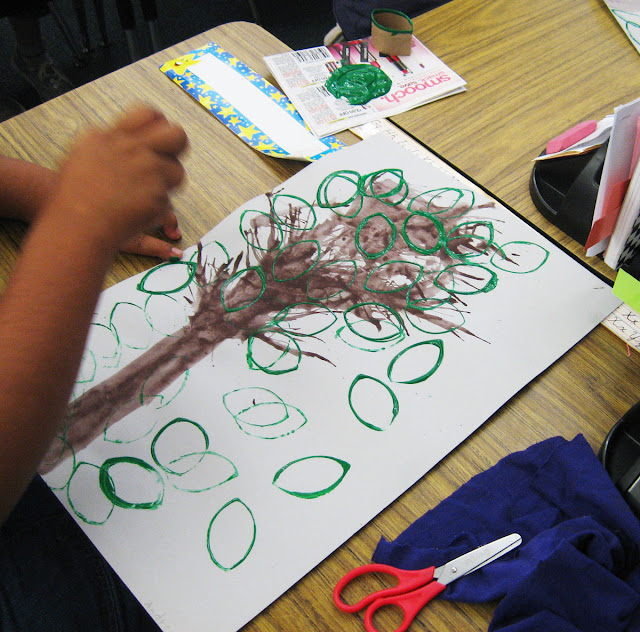 The next week we printed the leaves with a somewhat flattened and cross-sectioned cut up toilet paper tube dipped in green tempera... 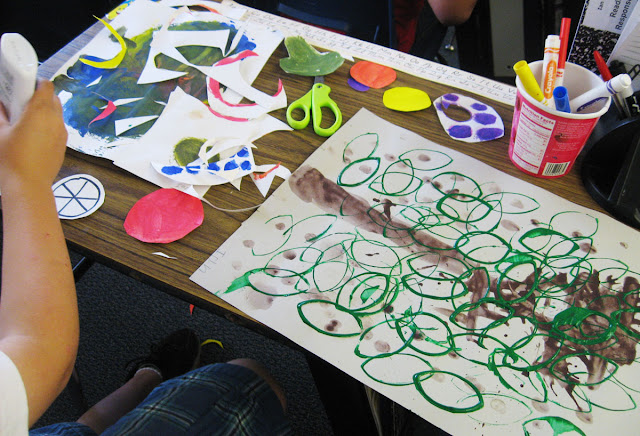 Cut out the fruits to glue on... 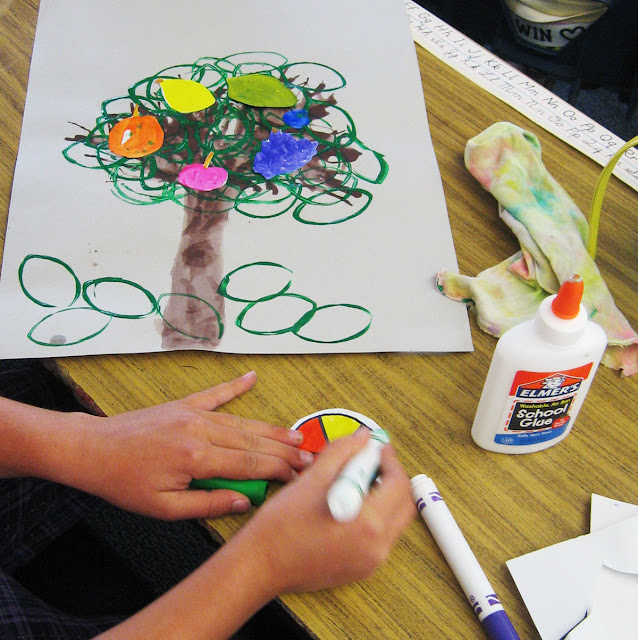 Colored in a tiny color wheel to add to their artwork. 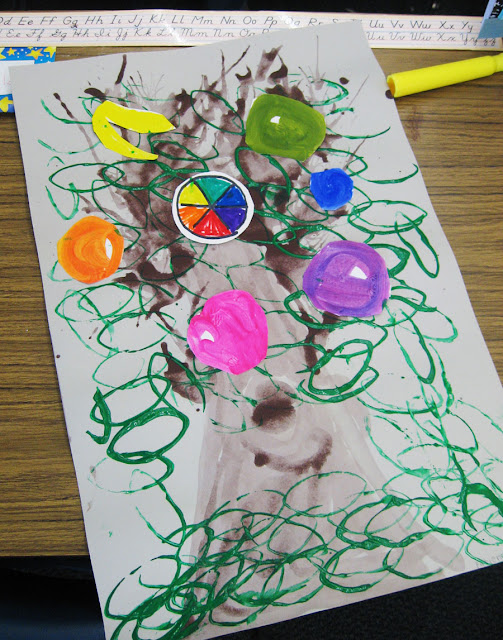 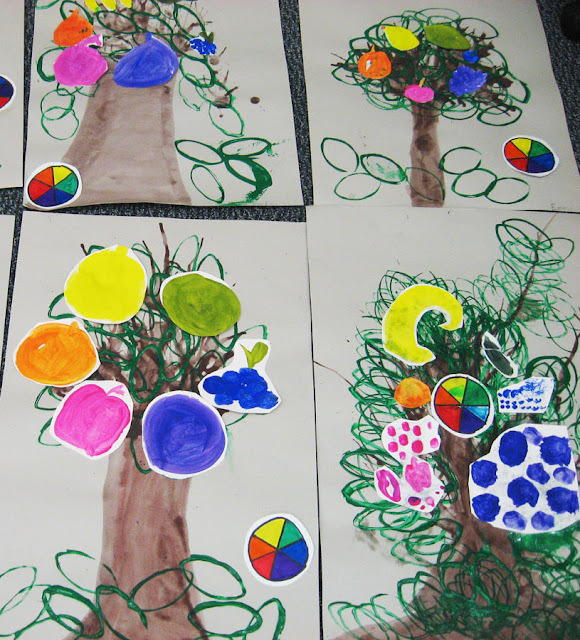 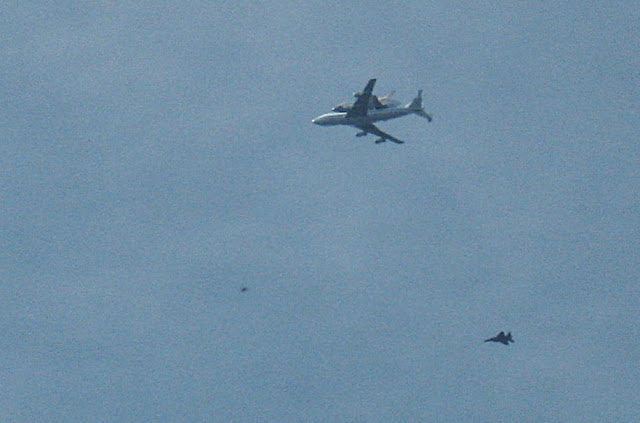 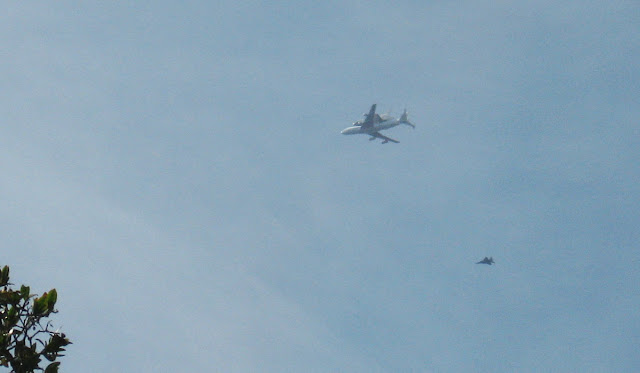 The Space Shuttle riding on top of a jumbo jet  flew right over my house just a few minutes ago.  The top picture not only has its escort, but a blurry image of a bird.
Posted by Susan Beauchemin at 11:39 AM 2 comments: 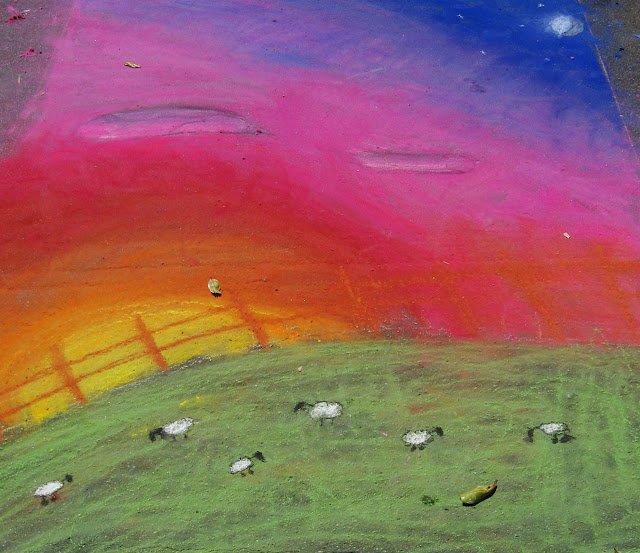 Of all the different chalk art I viewed this weekend at the I Modonnari festival in San Luis Obispo: 3D, realistic, fanciful, stylized, beautiful and not so beautiful, I was drawn to this art work created by Benjamin H 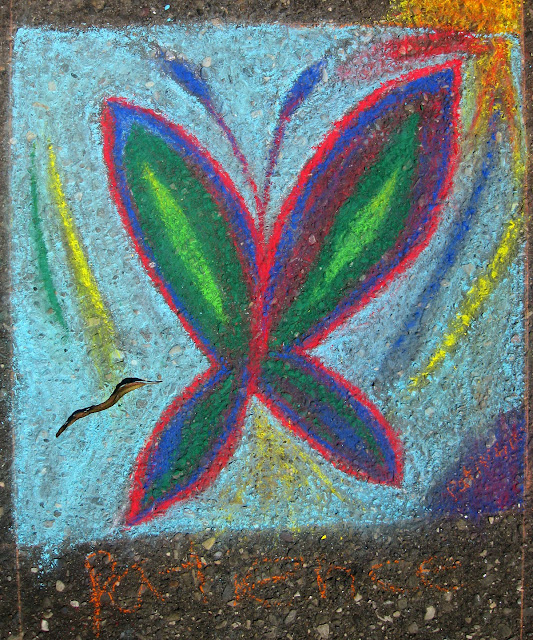 and of course this one done by my granddaughter with some coloring-in help from me.  I was asked to help with one of the bigger squares--I helped flesh out a hand and a foot on a ballerina, but I'm afraid I don't have a good picture of that one, but it was fun to do a bit and move on! 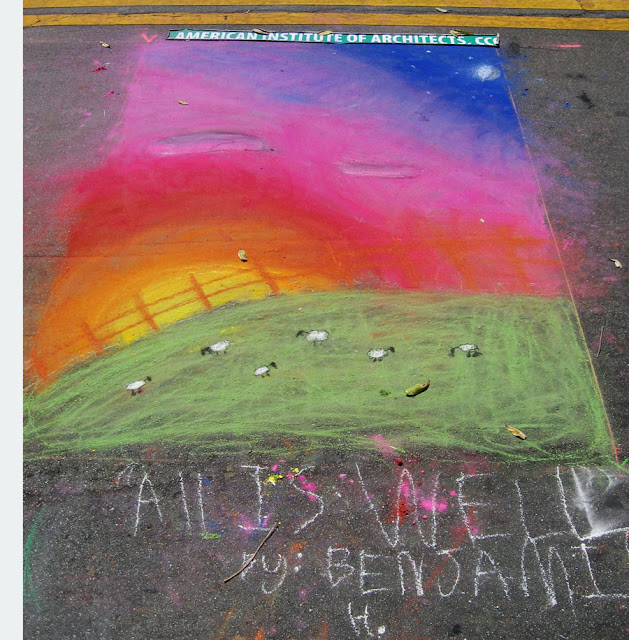 Plus the message won me over!
Posted by Susan Beauchemin at 2:48 PM 3 comments: 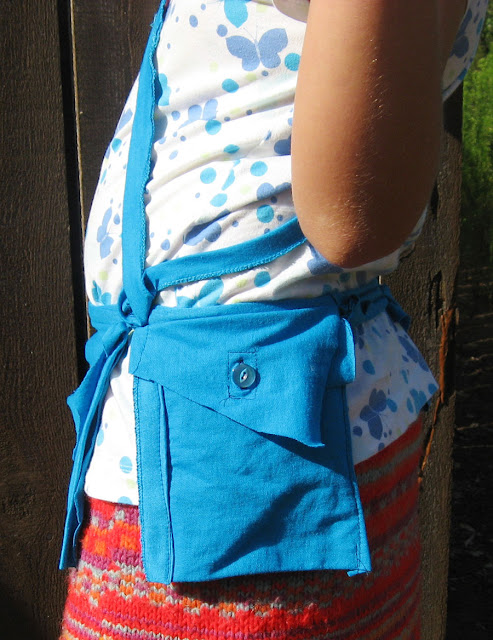 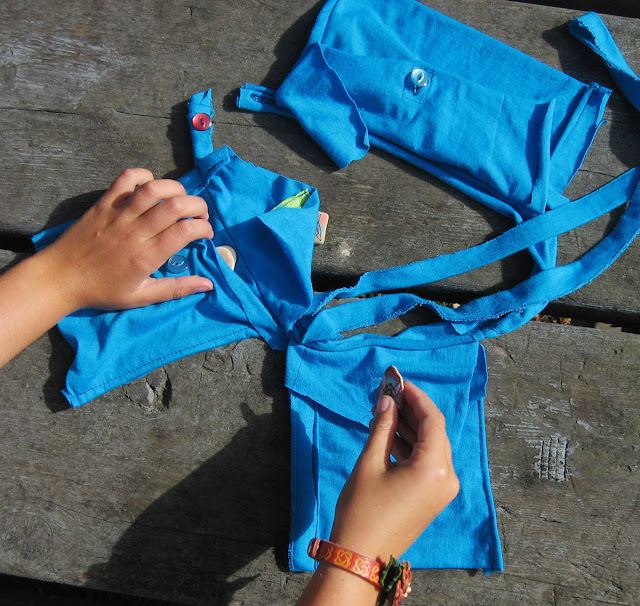 My granddaughter designed and sewed this pouch-belt with attached shoulder strap--she wanted to carry many things at one time.  I did help a little.  I persuaded her to have an opening to the belt, knowing it wouldn't stretch over her head as she wanted.  Besides setting up my mother's old Singer sewing machine and sitting close by to help with threading and such, (I'm a little protective of that machine!), I helped with the button holes and buttons.  She made this with left over pieces of a T-shirt that I had cut up awhile ago to make T-shirt yarn. 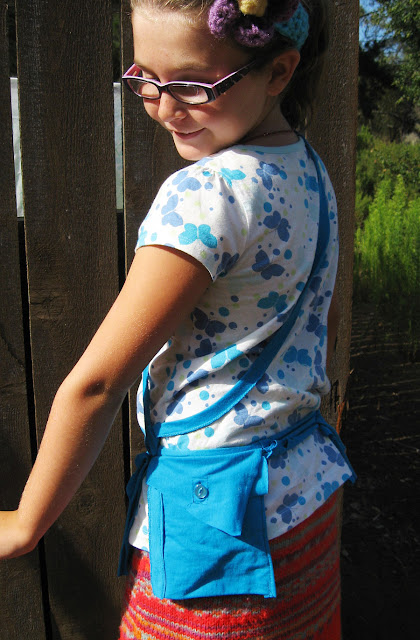 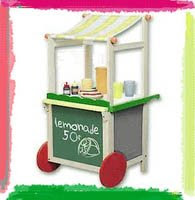